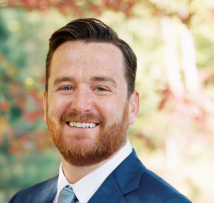 After growing up in Staten Island, New York, Matt attended the University of Kentucky beginning in 2007 where he was a four year member of UK’s Track and Field Team. After obtaining his undergraduate degree in Economics in 2011, he returned to New York City and obtained a role with UBS Financial Services in Wealth Management Operations. After relocating to Tennessee in 2014 to pursue opportunities within UBS’s Nashville office, Matt served as the Team Lead for the Product Operations teams. These teams were responsible for supporting Financial Planners with their clients needs. While in this role he was able to obtain a Master of Business Administration degree from the Jones College of Business at Middle Tennessee State University graduating in May of 2018.

When not working, Matt enjoys spending time with his wife Liza, their 3-year-old English Setter named Penny, as well as their families and friends here in Nashville. Matt also has a passion for running, traveling, and cheering on various sports teams!